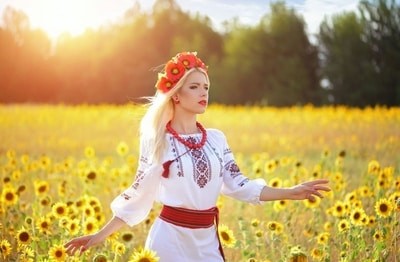 We have already told you a lot about Ukraine, Russia, their dating culture, foods, and even the most popular names and celebrities in these countries. However, we have never discussed traditional Ukrainian or Russian clothing.

So today, we from Best-Matchmaking decided to give you one lesson in Ukrainian history and tell you as much information as possible about the traditional Ukrainian clothing. We have to confess it was quite interesting for us to work on this post while traditional clothing is something that people here start forgetting.

Some of the facts we have provided here were unknown to us even. So, we are happy to introduce you to the world of traditional clothing in Ukraine and tell you about its background and interesting traditions related to it. Make yourself comfortable and keep reading until the very end! It is going to be interesting!

Some background to traditional Ukrainian clothing 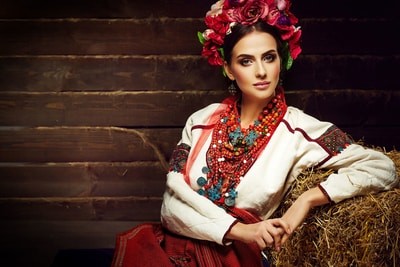 National clothing is always something very interesting and gives an impression of the nation in general. Traditional Ukrainian clothing has come from the time of Kievan Rus. It is not the same in different parts of the country and has lots of peculiarities in every region of Ukraine.

But if we look at both male and female clothing, we will realize that a homemade shirt made of homespun cloth is an integral part of both wardrobes regardless of the region.

This shirt is called Vyshyvanka and its main feature is the embroidery on the cuffs, hem, and neck.

Girls in Ukraine have always worn a shirt without outerwear and married women covered their heads with a shawl. And their outfit was supplemented with a waistcoat and maxi skirt. No matter what part of Ukraine people were from, they wore belts, jewelry, and headdresses decorated with ribbons and flowers.

The abundance of beads and ducats determined the status of women. Men have worn simpler clothes, including a linen shirt and cloth pants.

The differences in Ukrainian clothing in different parts of the country

Depending on the part of Ukraine, the traditional clothing had its peculiarities. Thus, in Northern Ukraine, traditional decorative elements were pretty modest. It was a tradition to weave and embroider in bicolor or even monochrome combinations. Red and black colors were the symbols of courage and wisdom of generations.

Red and white embroideries symbolized happiness and purity. The design was very restrained and had lots of geometric ornaments. In Southern Ukraine, they used brighter colors. For example, on the open neck of the shirt, they embroidered in red, yellow, and green.

Jewelry and belts were an integral part of traditional clothing in that region. They used flowers and plants as ornaments, for example, mallow flowers or grape branches. The traditional clothes in Southern Ukraine were influenced by their interaction with Moldovans.

In Western Ukraine, traditional fashion was affected by Hungarian and Polish culture. Their traditional dresses and shirts contained very complex geometrical ornaments. In the Carpathians, they used to wear very richly embroidered, appliqued, and woven shirts and dresses. Their embroidery was multicolored and the main colors in it were red and black.

They decorated their clothes with colored beads, gold, silver, and metal elements. The bottom edge of the Hutsuls’ trousers were decorated with embroidery from the inside and folded upwards.  They used green and yellow woolen threads. Eastern Ukrainian traditional clothing was influenced by the ancient Slavic and Russian culture.

They wore simply-tailored shirts with narrow sleeves and neat decoration on their cuff. The embroidery consisted of different colors and contained bright ribbons, grey fringe, and lace. They used a lot of waist accessories and ornaments. They were appliqued from cotton velvet or brocade. 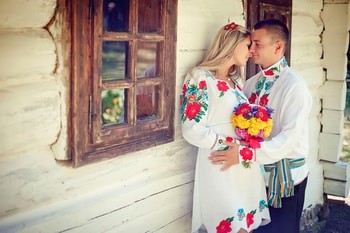 It is also quite different from the rest of Ukraine. Traditional clothing in the central areas, including the Poltava region, consisted of white-on-white embroidery and a lot of red and black ornaments. They used vegetative or geometric ornaments.

But later, in the 20th century, women started to wear threads of different colors for their shirts’ decoration. From the 17th to the 19th centuries, their embroidery was minimalistic and contained only red and blue ornaments on white shirts.  The sleeveless and outer clothing was decorated with a cotton applique.

Of course, the wreath of both fresh and artificial flowers was a mandatory element for women’s clothing in Ukraine. Even now, when children wear traditional Ukrainian clothing for some school events, you won’t see a girl without a wreath or a red ribbon on her head.

Traditional Ukrainian clothing is characterized by hand embroidery that has a very rich history. And it has existed since ancient times. The patterns embroidered on both men’s and women’s shirts helped antique Ukrainians express themselves. Since childhood, girls learned how to embroider. Vyshyvanka is an embroidered shirt for both men and women.

Even now, girls in schools learn embroidery in their shop classes. Embroidery techniques, colors, and colors differ in every Ukrainian region. Necessary to admit that Ukrainians wore both casual and festive shirts, the ornaments of which had their special meaning. Antique Ukrainians even believed that those ornaments protect them from evil.

Ukrainian national costumes had very diverse and rich patterns and ornaments. Ukrainians also wore zhupan (short warm overcoat) or a jacket over vyshyvanka. It is interesting that unmarried girls wore their shirts over the skirts while married women tucked it into their skirts.

The symbols of Ukrainian embroidery 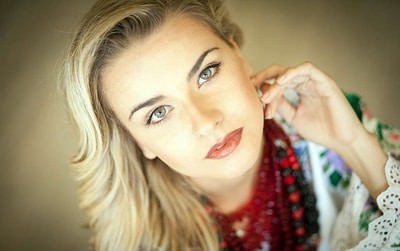 We can divide the embroidery patterns in Ukraine into geometric, floral, and zoomorphic ones. Of course, geometric and floral were the most popular while zoomorphic were quite rare. Geometric symbols are common for male clothing while floral ones – for the female one.

Children also wore vyshyvankas. The first shirt for a baby had to be made of the worn parental shirt to keep the energy of the parent. This way, Ukrainians protected their children from diseases and evil eyes. A child received his first shirt when he was three years old. Girls wore a shirt made of their mother’s shirt and boys – of their father’s.

National clothes in Ukraine reflected cultural features, so an embroidered dress was one of the most important attributes of a Ukrainian wedding. In ancient times, the outfit of Ukrainian brides was very bright and richly decorated. They used a special cloth for it with different patterns.

A Ukrainian bride wore a wreath of flowers on her head and her gown was supplemented with a wide red belt or satin ribbon. A bride also wore red boots. Low-necked dresses were forbidden because a bride had to be modest. Brides wore traditional Christian wedding dresses that were as high-necked and simple as possible.

Even when a modern couple decides to get married in the church, a bride’s dress has to be covered. Ancient Ukrainians believed in the power of embroidery that could program a happy and long family life. Youth and beauty were symbolized by red poppies while white lilies symbolized the innocence of the bride.

The type of ornament depends on the embroidery stitches called the technique. Can you believe there are almost one hundred embroidery techniques in Ukraine? Each region has its own favorite technique. One cross-stitch is the most famous and beloved technique though and appeared in the middle of the 19th century.

The embroidered shirts may contain one-, two-, or multi-color patterns. There are also five basic colors used in the traditional Ukrainian embroidery – red, black, white, yellow, and blue. Each of those colors has its meaning and symbolizes certain notions and values. A long time ago, you could tell a lot about someone’s character and goals from the pattern of his or her shirt.

You may be surprised but people nowadays wear traditional Ukrainian clothes not only on Independence day or different national holidays but often, for their weddings or birthdays, it is quite fashionable to wear them on a daily basis. Children at schools often wear Ukrainian vyshyvankas as a part of their school uniform.

Girls and boys at school wear them with jeans, skirts, and trousers and it looks pretty stylish and unique. Moreover, such clothes became trendy in the whole world. They wear not only embroidered shirts now but also dresses, and even coats. 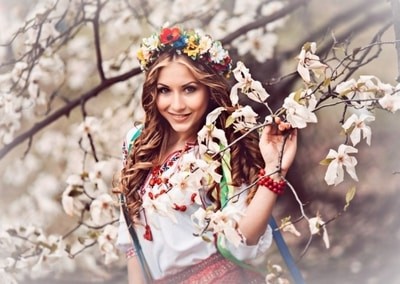 Yes, guys, we hope that now you know how a Ukrainian traditional dress and wedding dress looked like. But you probably didn’t know that even today, lots of modern Ukrainian designers and manufacturers offer modern wedding and everyday dresses with the elements of traditional Ukrainian embroidery.

Such thematic weddings are very popular in Ukraine now and we must say, a Ukrainian or Russian bride in such a traditional dress looks especially beautiful.

And if you have more questions about Ukraine, Ukrainian culture, and Ukrainian brides, Russian mail order brides, or Latvian brides, do not hesitate to ask Kate for a free consultation or share your comments below.

Kate will not only reply to your questions but also will help you choose the right dating membership plan or International matchmaking package for you at a reasonable price. We hope that our tips and posts will help you learn more about the country and culture of your future bride!