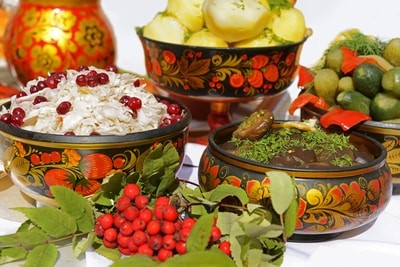 Now as we from Best-Matchmaking started to post profiles of Russian women, you keep asking us different questions about Russia, Russian brides, and Russian culture.

And since food is one of the most important parts of any culture, we decided to make you acquainted with that aspect in Russia. So today, you will find out about the most popular Russian dishes.

In case you will go to meet your woman in Russia, you should know exactly what dishes you should try there. So get ready to make notes and read till the very end while it is going to be not only interesting but it sounds delicious.

When you think of a food destination, Russia may not be the country of your dreams and not the very first country that comes to your mind. However, its traditional cuisine is pretty interesting and delicious. There are so many traditional dishes worth trying.

If you ever come to Russia, you will be surprised at how diverse Russian cuisine and its flavors are. Russian cuisine is influenced by Europe, Asia, and the Middle East.  Popular Russian food dishes are usually cooked vegetables and wheat. They include soups, stuffed dough, and porridges.

Russian cuisine cannot be called a healthy one, as probably any other cuisine of the world while it contains lots of fat and dough. But at the same time, they eat lots of meat, fish, and vegetables that is not so bad.  Moreover, the combination of ingredients is so tasty that you cannot resist trying it.

What is traditional Russian food?

Russian cuisine is really unique and different from that of other countries. Lots of factors, including environmental, geographical, social, historical, and economic have influenced the formation of traditional Russian cuisine. The abundance of products used for cooking is one of the main features of a true Russian cuisine.

Russian food culture consists not only of dishes but also of drinks and there is also a variety of drinks served for different occasions. If trying Russian dishes is your goal, welcome to the next section where you will find out what are the most popular Russian dishes and how to cook them! 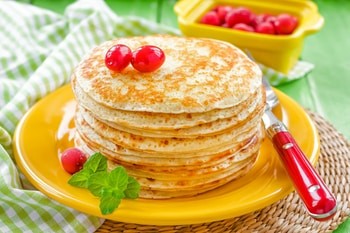 Bliny or crepes or pancakes can be cooked absolutely for any occasion in Russia. They can serve as breakfast or be eaten for dinner depending on what they are stuffed with.

You have used probably that a pancake is something like a dessert but it is not for Russians. They can serve as a dessert, snack, or even as a main course.

In Russia, they serve pancakes with different ingredients, including sour crème, salmon, honey, caviar, and many others. Bliny are big and are usually of the size of the plate.

In Russia, there is a holiday called Maslenitsa (Butterweek), it is a week before Lent.

Such a pancake is a symbol of the sun. And it can be felt not only in shape but also in its warmth on a cold day. And you can be surprised now because there is no one single recipe of cooking pancakes, there are tons of them. Below, you will find one of the most popular.

How to cook Russian pancakes?

This all should be stirred well with a whisk with the aim to break up lumps. Now we add a cup of milk and mix it all well. The dough has to be rather liquid. If it is not liquid enough, your pancakes won’t be thin, and it has to be. Now beat the four whites in a separate bowl, add salt and fold them gently into the batter.

The pan has to be heated well and add some vegetable oil onto it. Now ladle the batter and turn your pancakes when the edges get dry. Enjoy your Russian pancakes! 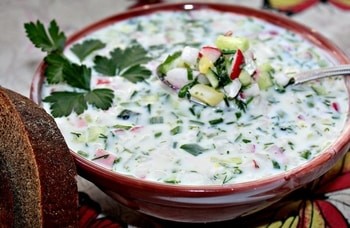 Okroshka is a very popular Russian food, but only in the summertime. Yes, can you imagine that there are dishes popular only for certain seasons?

Okroshka is a cold soup and for that reason, it is perfect for a hot season. The ingredients used for it include diced raw vegetables, potatoes, boiled meat or sausages, and eggs.

As a rule, it is served with kvass (a popular Russian fermented drink of black rye) and sour cream. The name “okroshka” means crumbled into small pieces. It comes from medieval times. This soup is really easy to make and includes chopped black radish and onions mixed with kvass.

Like all the recipes, the recipe of okroshka was altered with years and enriched with other ingredients. It is believed that this Russian dish was invented by barge haulers. They worked on the Volga River and were given dried fish and kvass for lunch and soaked their fish in kvass. But later, they started adding more ingredients to make the dish more nourishing.

How to cook okroshka?

To cook okroshka according to the traditional recipe, you should take 1,5 liter of kvass, about 200 gr of boiled meat, 2 eggs, 2 cucumbers, 3-4 radishes, 5-6 potatoes, green onions, greens, salt, and sour cream. It can also be made of a broth or just kefir.

You should chop cucumbers, meat, eggs, greens, and radishes and put it all in a deep bowl. In other words, make such a salad out of all the ingredients. When you chopped and mixed everything, added salt to it, pour cold kvas, broth, or kefir to the bowl. The sour cream can be added at once if you cook it on kefir.

If not, then just serve the soup with sour cream. Such Russian dishes seem pretty strange while everything is simply mixed but it is really tasty and just perfect on a hot summer day. A great alternative to borscht or hot soup! 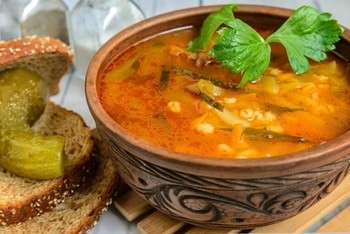 Russian shchi is typical and very popular cabbage soup. It is made of fresh or fermented cabbage. The variety of ingredients can be very different.

They may include potatoes, carrots, onions, and some meat, for example, chicken. They often replace cabbage with sauerkraut and then they call that soup sour shchi.

Also, there is green shchi with sorrel, nettle, or spinach. That Russian dish appeared in Russian in the 9th century.

By the way, cabbage was brought to Russia from Byzantium. That dish is very simple and for that reason, so popular.

By the way, it can be cooked in both rich and poor families because there are two variants of cooking – with meat or without it. So, it can be eaten as a vegetarian meal as well. It can also be compatible with any religion and Russia is a multi-religious country. 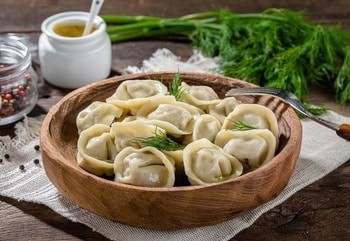 We have already told you about Varenyky – a Ukrainian traditional dish. It can be cooked in Russia, too, and is quite popular.

However, pelmeni came to Ukraine from Russia. And we would like to tell you more about that dish.  Pelmeni can be also called meat dumplings and they are very popular not only in Russia but also in Ukraine, Belarus, and Georgia.

But this dish came from the East and its title is Finno-Ugric. Pelmeni have also been called bread ears before. In ancient times, such dumplings were a symbol of sacrificed animals and were very important for pagans. They were extremely popular in Siberia and the Russian explorers discovered pelmeni in the 14th century.

Pelmeni are made of dough stuffed with meat, they also remind Georgian khinkali. They can be easily found in any food store in the frozen form. You can keep them as long as you wish in the fridge and boil whenever you are hungry. Pelmeni can be cooked of beef, lamb, and pork but modern variations include even chicken pelmeni.

Even more information is available: 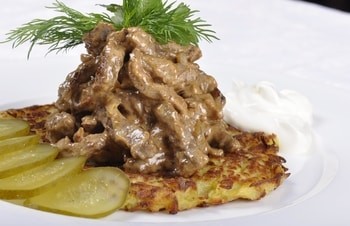 That dish can be probably found in any Russian restaurant. It is extremely popular in Russia and consists of small pieces of beef fillet sautéed in sour cream sauce with mushrooms and onions. The title comes from the name of Count Alexander Stroganoff who lived in the late 19th century in Odessa.

Beef Stroganoff is considered a VIP-meal and was represented on the balls and meetings in high society. Count Stroganoff arranged dinners and anyone could join them. The only condition was to be highly educated and properly dressed.

That dish is made of strips of beef in a creamy sauce with mushrooms that can be replaced with tomatoes. It is often served with rice, potatoes, or noodles. The history of that dish is really long, so there are also a lot of variations of cooking it.

Check a FREE gallery of single Russian and Ukrainian women!

Conclusion: Russian cuisine is worth trying! 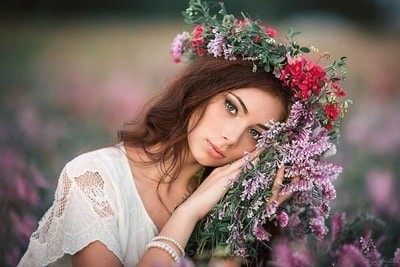 Now you know the most popular Russian foods, guys. And we hope that once you meet your Russian or Ukrainian brides, you will take a Romantic and marriage tour to Ukraine to meet her in person and try one of these dishes in a local restaurant.

Believe us, every western guy who has ever tried Slavic cuisine could never forget it and enjoyed his Slavic wife to cook those dishes in his home country already.

Still have questions about Slavic mail order brides? Then get in touch with a professional matchmaker and dating blogger Kate who will help you make the right choice and meet your woman the soonest.

On Best-Matchmaking, you can choose a proper dating membership plan  and even a International matchmaking package at a reasonable price! We hope that your search on best-matchmaking will be as simple and quick, as the preparation of these traditional Russian dishes!